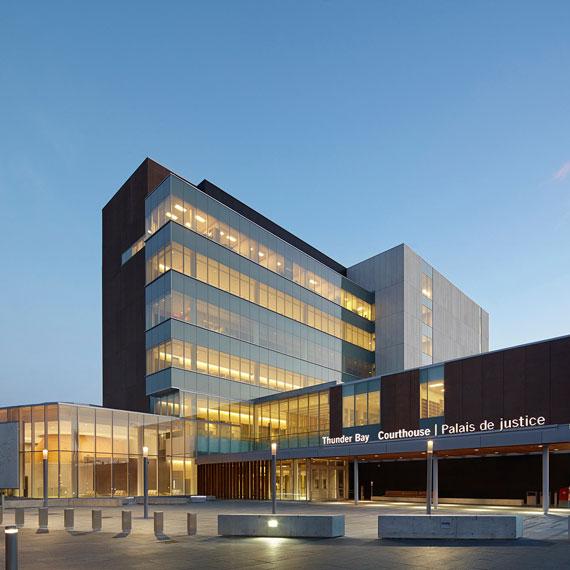 The new facility, located between Brodie and Archibald streets, south of Miles Street, in Thunder Bay’s downtown south core, consolidates the Superior Court of Justice and Ontario Court of Justice, previously operating in separate locations. The multi-storey building has space for 15 courtrooms, including a multi-accused, high security courtroom and four judicial conference rooms, including one Aboriginal Conference Settlement Suite.

Construction of the new facility began in November 2010. At the peak of construction, there were an estimated 320 construction workers on site daily. The new courthouse was fully operational on April 14, 2014.

The design and materials used throughout the new courthouse reflect Thunder Bay’s natural environment. Stone and wood are used at the building’s base for durability and to represent the natural elements of the Thunder Bay region. The textured glass tower on the building’s south face is designed to evoke the region’s many waterfalls.

Madeleine Meilleur, Attorney General
“This modern and accessible facility brings together all court services in the region under one roof. The Thunder Bay Courthouse is another example of our commitment to building courthouses that meet the highest standards for accessibility, sustainability, security and technology, including an Aboriginal Conference Settlement Suite, the first of its kind in Ontario.”

Bill Mauro, Minister of Municipal Affairs and Housing and MPP for Thunder Bay-Atikokan
“I’m pleased we were able to deliver a project that Thunder Bay has been seeking for a very long time. Consolidating courts services will help create a more efficient justice system and provide some much needed stimulus for our south core rejuvenation.”

Michael Gravelle, Minister of Northern Development and Mines and MPP for Thunder Bay – Superior North
“Our new courthouse is a prime example of our government’s commitment to investing in infrastructure across the province and right here in Thunder Bay. The completion of this project is great news — not only for the justice community, but for local businesses, community agencies, and residents.”