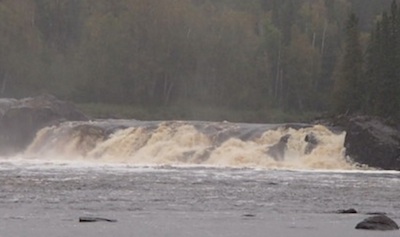 Majority owner Boralex Inc. has announced in a news release that Construction has started on the 16-MW Yellow Falls hydroelectric plant.

The project on the Mattagami River about 18 km south of Smooth Rock Falls is expected to cost between US$71.5 million and $75.4 million to complete, by the first quarter of 2017.

“Following analysis and development of the Yellow River hydroelectric project for which the rights had been acquired previously, Boralex finally started to work on its first hydroelectric power station in Ontario,” company president and CEO Patrick Lemaire said.

The powerhouse will be flanked by two 15 m. high dam dam sections.  The news release says the intake and powerhouse will be combined in a close-coupled arrangement near the river’s west bank, with two eight mw turbine-generator units in the plant. There will be a spillway with three vertical-lift, fixed roller gates and one set of step logs adjacent to the powerhouse

HydroWorld.com most recently reported on the plant in March 2009, when then-developer Canadian Hydro Developers Inc. announced it had begun pursuing approvals for the plant.

Boralex, which now owns 75 per cent of the project, said it has an initial 20-year power sales contract with the Ontario Power Authority with four five-year renewal option.